The human mind is God's greatest creation, With this mind, humans were able to invent and develop solutions to their problems.

Also, with this mind humans have established different sciences. one of the most important of these sciences is engineering. 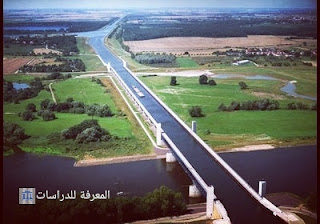 Certainly, the Germans are considered one of the most advanced nations in engineering. Also, the Magdeburg Water Bridge is certainly one of their most impressive engineering projects.

For people walking on their feet, cars, even trains.

Usually, bridges are a way to cross a river or lake, but some genius engineers in Germany decided that the Magdeburg Bridge would be a way for ships to cross.

Along the Elbe River, Magdeburg Water Bridge spans Until it reaches the Mittelland Canal, a major canal in central Germany.

Mittelland Canal, connects to the western side of the Elbe-Havel Canal, a 56 km long waterway. Connecting Magdeburg, with Brandenburg on the River Havel.

In this way, large merchant ships can, -in a country that depends so much on industry and export-, to move between the states of the Rhineland-Palatinate and Berlin, without having to enter and then exit the Elbe River.

This achieves a connection between East and West in Federal Germany.

A bridge that tells the history of his nation:

The Magdeburg Water Bridge is a living witness to the history of Germany in the twentieth century.

The Germans thought about this bridge more than 100 years ago.

But it was always interrupted by politics.

immediately after The German Empire collapsed after World War I, started thinking about building the Magdeburg Water Bridge in 1919.

Although the work has begun In the thirties of the twentieth century.

But, this was followed by a period of economic turmoil that ended with the rise of Nazi Hitler to power, then World War II broke out.

Germany was defeated in the war, and divided into two countries.

East Germany as a vassal of the Soviet camp, while West Germany allied itself with the West.

Despite the ability of West Germany to implement the project, political obstacles prevented contemplation of it.

Moreover, the volume of trade exchange between the two countries was not encouraging to carry out this project.

But the Magdeburg Water Bridge project is not dead, it was at the forefront of projects implemented by Germany after its unification and the fall of the Berlin Wall.

Finally, four months before their sad end in the 1998 World Cup, after losing to Croatia by three goals, the Germans began building the bridge they had long dreamed of in march 1998.

The German engineering masterpiece was opened in October 2003, To be since the Largest Water Bridge in Europe.

German engineers brought a lot of things to make the bridge, other than engineering equipment.

The Germans used to build the Magdeburg bridge:
*24,000metric tons of steel.
*68,000 cubic metres of concrete.

They gave the world a lesson, in which they say that work alone can change reality for the better.